I'm pretty steamed about this. My two-year old daughter, like most children, loves playing with our phones. We try to limit the time, but when she plays with them, we do have age-appropriate applications for her. One of these applications is the Baby Flash Cards application by eFlashApps, LLC. We downloaded the free version to try it out and our daughter loves it. Here's what one of the animal flash cards looks like: 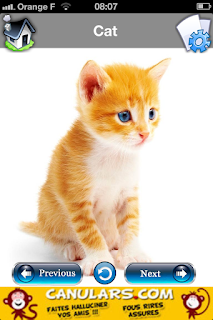 There are several interesting things to note about this. First, the "previous" and "next" buttons are new. This app used to be far more user-friendly: you could swipe or double tap that picture to get to the next animal. Guess which is easier to use for a baby? Obviously the prev/next buttons are going to be very difficult for a baby to navigate, but you notice how they are so close to that ad?  By making the app harder to use, the company made it much more likely that your baby would click on the ads when using free version.

And you know what? I sort of sympathize with the company on that one. It's not a nice thing to do, but when you use the free version of an app, you accept this sort of thing. It did mean, however, that we were not going to buy the application. If it's hard to use when free, there's no point paying for it.

It was hard enough for our daughter that we were going to get a different flash card app, but our daughter got the hang of those buttons (a younger child might not of), so we let it slide. We figured that for learning English (we live in France), if she sometimes clicks an ad, that's a small price to pay.

If you look at the above screenshot, you'll notice the ad at the bottom. I'm not typing out the URL or even the name because I don't want that company to get more exposure, but here's what their Web site looks like: 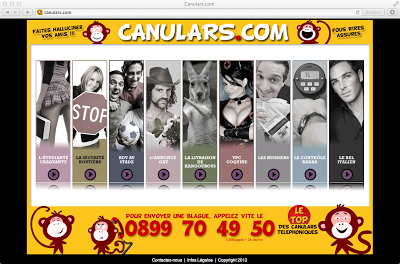 If you're reading this, there's a good chance that you don't read French, but you can guess whether or not the above Web site is age appropriate for a two-year old (the buxom brunette has dialog about buying a sex toy). This is some Web site about making prank phone calls. However, it's worse than you would imagine.

That's right. An advertisement on an iPhone advertisement targeting babies charges you for phone calls for an adult-oriented service.

Our call logs on the phone indicate that this is not the first time our daughter has "dialed" this number (the first time that we've found is last Friday).

I'm guessing that eFlashApps didn't do this deliberately, but I'm not sure. My wife points out that different versions of this ad are showing up on different pages of this app. Even if the company didn't do this deliberately, by making their user interface harder for babies to use, they made it easier for this to happen. I'm not sure how Apple managed to approve an advertisement that can make phone calls to an adult-oriented service, but given that it wound up on a baby application is pretty rotten.

Meanwhile, can someone please tell me where on the Apple Web site I can flag an app/advertiser for inappropriate content?
Posted by Ovid at 23:53

Email ThisBlogThis!Share to TwitterShare to FacebookShare to Pinterest
Labels: personal